But boy did their job just get harder

Share All sharing options for: The Mets trading for Lindor doesn’t signal the end of the Phillies

Listen, I’m not going to beat around the bush and tell you that the Mets trading for Francisco Lindor and Carlos Carrasco yesterday wasn’t bad for the Phillies. It was bad. One does not like to see their division rivals, the team that the fanbase probably hates the most, get markedly better, probably somewhere in the neighborhood of 7-8 wins better. And to be sure, there was a lot of doomsaying and “sky is falling” commiseration on social media yesterday once people found out that one of the five best players in the game will now be facing Philadelphia at least 18-20 times next year.

Yet I would caution everyone to step back and take a deep breath and ponder some points first before you grab the pitchforks and head to Citizens Bank Park.

The offseason isn’t over

The Phillies went into this offseason knowing that moves needed to be made. The bullpen was historically bad, there were two free agents leaving the lineup and holes needed to be filled. There was no way to ignore it. Yet the team also went out of their way to make sure people understood that this wouldn’t be like offseason in the past where the team threw around cash like it was stupid money. There would be a COVID-caused belt tightening, even as the owner continues to have two more commas in what he is worth than the average fan. So there would have to be moves, just not the big, expensive ones.

While the Mets have certainly gone out and spent money, adding James McCann, Trevor May and now Lindor and Carrasco, the holes that the Phillies have can still be filled with high quality players. Of course, everything starts with the catcher and J.T. Realmuto still remains untethered to any organization. The Phillies can still sign him and all of a sudden, they have also added 4-5 wins to their roster. Is it Lindor level? Of course not, but it’s not nothing.

The bullpen needs to get better and they have already tried to address that issue by getting a hard throwing left-hander that really won’t cost a ton. It’s one move, but there should still be some wiggle room in the budget to add a few players that can help the end of game strategy, plus there is still room for improvement from those who are already here (looking at you, Conner, Jojo and Ranger). Add in the fact that the biggest thing the team needs - right-handed relief pitching - is still available in high quantity on the free agent market, bargains still out there to be had. If the incumbents can come back from the depths they reached in 2020, as the law of averages say they should, and the team makes some wise investments in the relief pitching department, the biggest weakness of the team looks a lot better.

Of course, now we have to look at the shortstop position. 2020 saw Didi Gregorius provide the team with the kind of firepower they haven’t seen from the six since the days of Rollins. But now he’s gone and they have to replace him. That situation still needs to be borne out, but it’s not like Jean Segura is nothing! While he isn’t at the Gregorius level with the lumber or the glove, he’s a more than adequate replacement. And who knows! Maybe by waiting out the market, the team can get either Gregorius or another name (Marcus Semien) to come to Philadelphia at a lesser than thought price.

The whole point is that the offseason isn’t over yet. There is still time to make moves. If some of those moves are around the edges, the finding of cheap treasures that can upgrade the team without costing a whole lot, don’t you trust Dave Dombrowski to make those moves more than the former regime?

The current roster still can stack up with New York

Now that Lindor and Carrasco are officially in New York, we can look at their current depth chart and compare it with Philadelphia. Here are the latest charts from Fangraphs for New York: 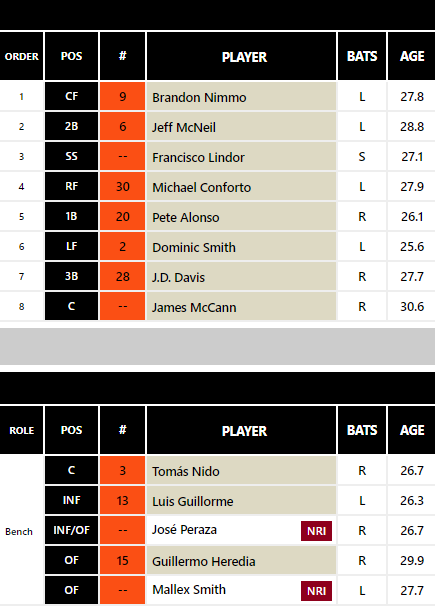 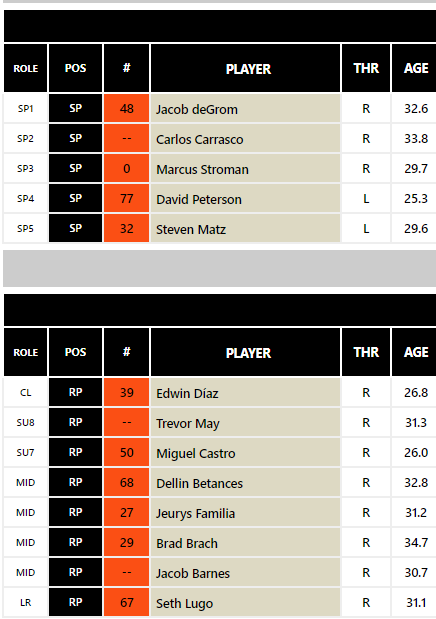 Yes, that lineup is quite good. Dangerous, in fact. Yet the lineup that Joe Girardi can pencil in isn’t exactly a collection of stiffs. At this point, having Bryce Harper, Rhys Hoskins, Alec Bohm and Jean Segura is a pretty good start to a lineup. We have to acknowledge the absence of Realmuto and inclusion of Andrew Knapp, which is a steep downgrade, but....well...see above. They can still get Realmuto.

So yes, the Mets’ lineup right now is superior. That, one cannot deny. But it’s also something that can be neutralized with good pitching, especially good starting pitching. It’s something that the Phillies actually do have!

Aaron Nola/Zack Wheeler/Zach Eflin is a pretty good start to a rotation. We all know about Nola and Wheeler and how good they are, but Eflin was coming into his own at the end of 2019 and during much of 2020. Comparing them to what the Mets have and the similarities are actually pretty close. Obviously, anyone would take Jacob deGrom over Nola, but Wheeler over Carrasco isn’t a stretch and depending on your opinion of Marcus Stroman, one might could make an argument that Eflin could be over him. The backend of both rotations is pretty much a wash, but the upside of Spencer Howard is probably the greatest of the four names (David Peterson, Steven Matz, and Vince Velasquez being the others). The wild card, of course, is Noah Syndergaard and the timetable of his return. While there are a lot of success stories of people coming back from Tommy John surgery, it’s not always a guarantee that players get back to their usual selves. At the earliest, Syndergaard will be back in late summer. Even then, we aren’t sure if he’ll be able to go a full six, seven innings. So counting on him to be a productive member of the team this year is not something the Mets should, or even will, be doing.

The bullpens aren’t close because....well did you see 2020? Still, the Phillies have addressed it somewhat with Alvarado, so they realize that improvement is a must. Time being on their side as far as the free agent market movement, they can still get better. They don’t have an Edwin Diaz to finish off the end of the game, but the rest of the Mets’ bullpen is still suspect. It’s not a Rays-type lock down group.

The Mets got better yesterday. There is no getting around that. The lineup is a dangerous one, though one that is going to depend on gains made in 2020 that weren’t previously made in seasons prior. The rotation is good, but not as deep to begin the year without Syndergaard. The bullpen still favors the Mets, but the gap between the two isn’t as great as it could be once free agency is over.

Does a lot of this depend on what happens the rest of the offseason? Obviously. Unfortunately, the team has truly backed themselves into a corner by not getting Realmuto to sign before he became a free agent, nor did they decide to invest in James McCann. But as in chess, when your opponent makes a move, you make a countermove, something the Phillies will more than likely be making. Whatever that move is, we’ll have to wait and see. So before casting too much judgement on the Phillies and how far behind the Mets they are, be patient and wait for the rest of the winter to unfold. The end isn’t near.