The most important player headed in 2022

So many hopes were riding on Alec Bohm in 2021. After finishing runner-up as the National League Rookie of the Year in 2020, much was expected of the young man. Then he fell flat on his face and lost the confidence of the coaching staff. What can he do to get that confidence not only from the coaching staff, but also from himself?

Looking at Bohm’s final line isn’t all that inspiring, but one has to consider how poorly he was hitting to get a true feel for that line. On June 6, Bohm was hitting .209/.254/.301, the emptiest of batting averages and no on-base ability to speak of. He was held out of the lineup for a few days, then came back into the game on June 10. From June 10 to August 20, the numbers were actually much better, a .285/.358/.392 line in 176 plate appearances. The power still was nonexistent, but at least he was hitting for a decent average and not striking out nearly as much as he had. He had a good run of offense during that time.

It’s just that his season as a while looks so, so disappointing in comparison to his 2020 debut.

That line up top in the “good” section, where he had a decent batting average? What if I told you that he had a .378 BABIP during that time, suggesting that he was really lucky to attain even those punchless numbers.

The fielding was never going to be Gold Glove-worthy. That much was apparent from his days in the minor leagues. Almost to a man, the scouting reports said how he could maybe get to average at the hot corner, but that might be the top of his ability there. No one was knocking his work ethic, but sometimes you just have to accept reality.

Where we find the most disappointment is in his offense and this is where we can start to diagnose his issues. In 2020, we saw Bohm come to the majors and live up to the scouting reports on his bat. He had some good power and good contact ability, only to see both evaporate his sophomore season. Is that completely his fault? Well yes and no. Yes, because ultimately it is on the player to produce when at the plate. But also, it seems that Bohm was tinkered with a little bit prior to the season beginning. I did a little digging into past scouting reports from publicly available evaluators and most everyone had the same thing to say. From Fangraphs in 2020:

Bohm’s swing now more closely resembles Michael Brantley’s, not some strikeout-heavy slugger’s uppercut hack. His hands start high and stay tucked before he simply guides them down to wherever the ball is. If anything, this swing is less noisy than his college iteration, and somehow a 6-foot-5, long-levered guy with big power managed to have just a 14% strikeout rate at Double-A last year. Bohm has enough raw power to hit balls hard even with a low-effort cut, and he’s been able to hit balls all over the zone because of how direct his swing is.

From Baseball Prospectus in 2020:

Bohm’s calling card is raw power that he hasn’t quite translated into game power yet, and a potential plus hit tool that is far from locked in as plus.

Basically, dude could hit, but he needed some good coaching to get to the top grade of that tool.

Now, we of course do not know what exactly Dillon was telling Bohm, but from available data, we can see that he changed something about Bohm and how he hit. We see that from looking at spray charts. Below are spray heat maps from Bohm’s 2020 and 2021. 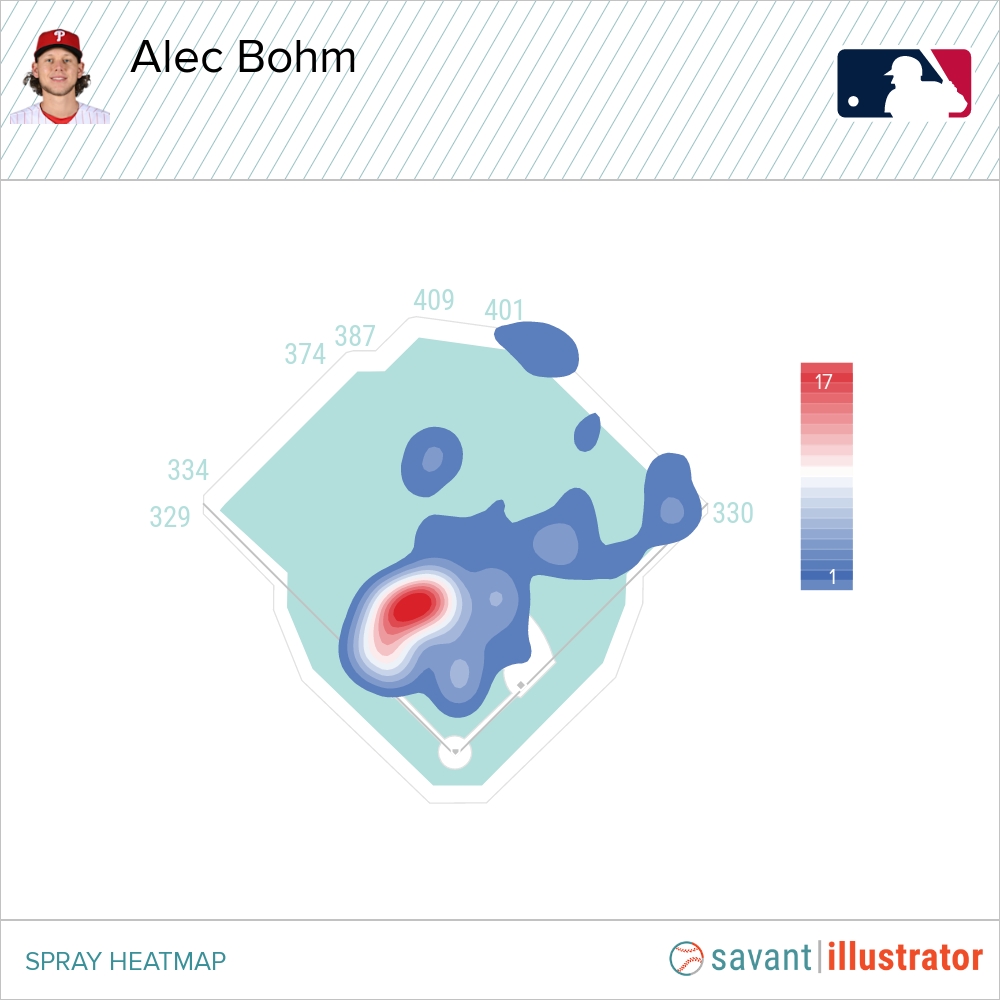 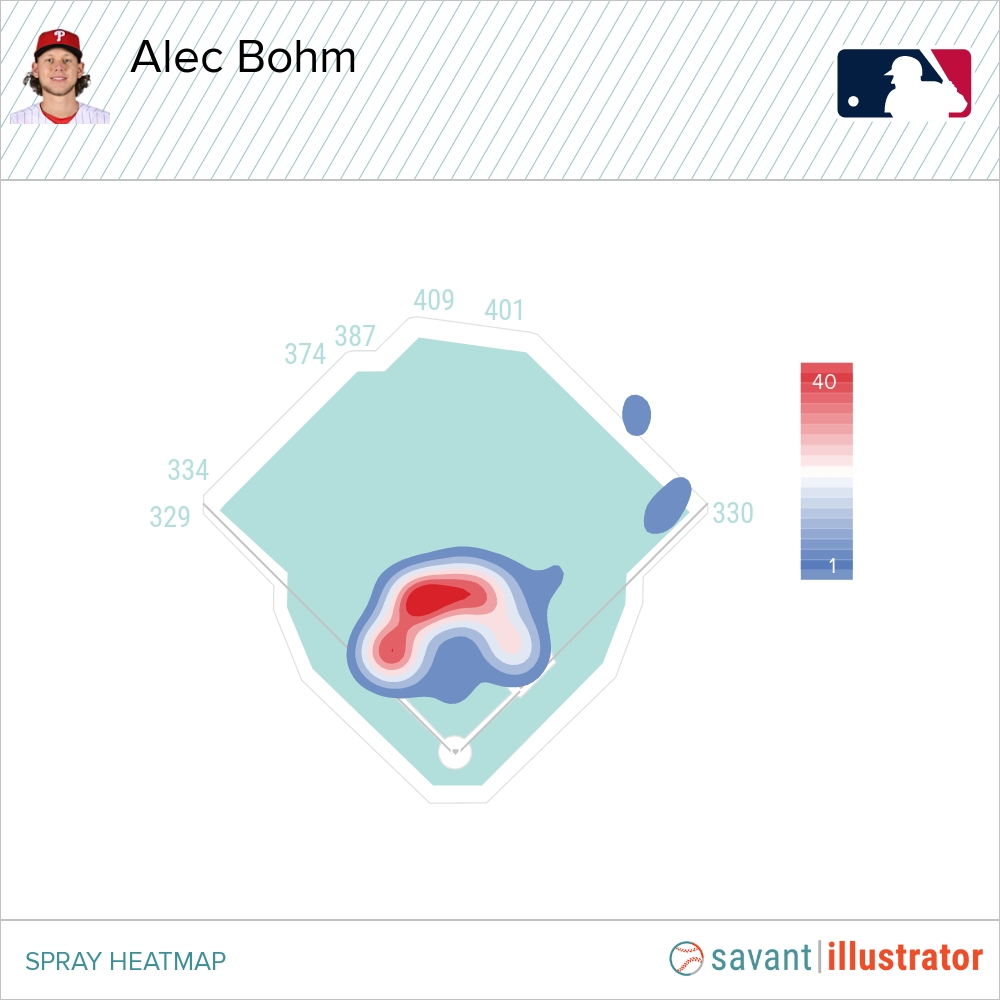 Somehow, Bohm became a groundball hitting machine to the pull side, getting away from the hitting the ball to the opposite field, the approach that worked so well in 2020. Why? Pitchers did not approach him differently, generally staying on the outside part of the plate against him, so in theory, Bohm was trying to pull those balls more, getting induced into weak groundballs.

Again, this is in theory. There was also a much larger sample size of balls in play in 2021 which may have skewed the heatmaps a little bit as well. But it certainly looks like something that the hitting coach tried to get Bohm to do (pull the ball more) wasn’t working. When he’s going good, Bohm has a very Jayson Werth-feel to him, the tall, lanky guy with a lot of power to the opposite way. If the team can get him back to that kind of approach, it’s possible that Bohm can continue his projected ascent to franchise cornerstone.

Bohm is one of, if not THE, most important players on the roster entering 2022. The team is (for now) forgoing the option of bringing in a third baseman and moving Bohm to the outfield, instead getting new voices as hitting coach and infield coach to help him improve his game. Kevin Long and Bobby Dickerson have been brought aboard to help with the entirety of the team, but it also feels like these two coaches were brought in with a specific eye on helping Bohm get back to, if not pass, his Rookie of the Year heights of 2020. He has the pedigree and by all accounts the work ethic to do so, so hopfully something can be unlocked.

With so many expectations placed on Bohm, it’s not hard to see how he came up short. That he fell so short was probably the surprise of the season. He was turning it around a little bit, but almost nonexistent power, it’s hard to give him a good grade on the year. Both of these grades have merit, so let’s just split the difference and give him both.