I'm writing this late, so this has already been decided for me-

The Phillies have holes to fill, and not enough money to fill all of them. That said, I still think they make a big splash and sign Kris Bryant. He's an ideal fit not just because he's still good (3.6 fWAR in 2021) and relatively young (2022 will be his age 30 season), but also because of where he can play. Third base, center field, and left field are all positions of need now, and Bryant can play in any of those spots. I have the Phillies signing Bryant on a backloaded deal in order to fit the team under the $195 million budget.

Even with Bryant's positional flexibility, there will still be a need for another outfielder. The Phillies outfield totalled 8.3 fWAR in 2021 which ranks 12th in baseball. That sounds "above average", but 6.6 of that is Bryce Harper. Another 2.3 of that total was put up by freshly released Odubel Herrera and Andrew McCutchen, meaning the remaining outfielders put together -0.6 fWAR. To fill in the other outfield spot, I think the Phillies should sign Tommy Pham. He still swings an above average bat, and that's with a BABIP 30 points below his career average.

To flesh out the bench, I think the Phillies need a bat first veteran, and who better than reclamation project Khris Davis to fill that role? Well, plenty, but Davis will likely be cheaper than those other options.

Finally, the bullpen - Seranthony Dominguez's return can't be the only thing to hang our hopes on. I have the Phillies re-signing Hector Neris (the team needs Hector), and adding Kendall Graveman, who has had health issues but turned things around a bit with a solid 2021.

With all of those free agent signings, the Phillies will need to create some financial flexibility through trades. Looking around the league, I believe the Phillies match up well with an Angels team that's trying not to waste both Mike Trout and Shohei Ohtani.

One Suarez has worked out well for the Phillies rotation - why not two? José Suarez has a few years of team control left, and would fill out the back of the rotation nicely.

Here are the players I would put on the Opening Day roster and their salaries for 2022. 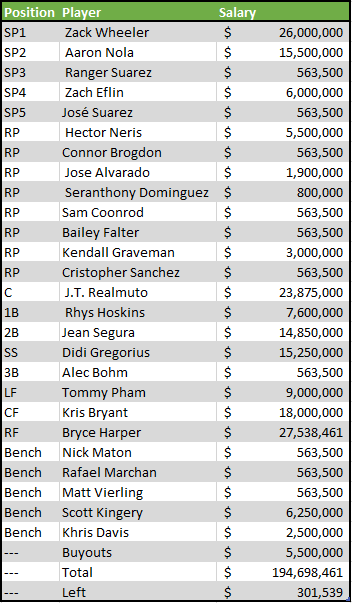 I think this team would have a good chance of making it to the postseason, albeit by the wildcard. Here are the Steamer projected fWARs for every player. 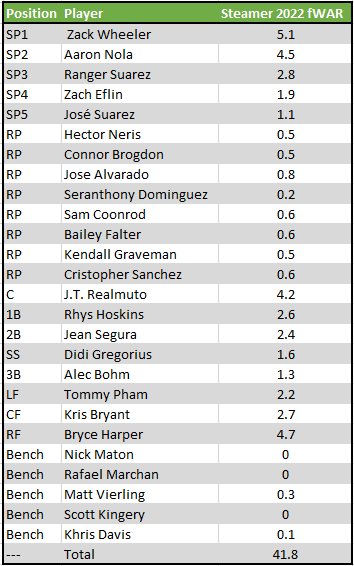 WAR and Wins correlate strongly - this team would project to win around 89 games. That could be enough to snag a wild card spot. If things bounce their way and they win a couple more, maybe even a division crown could be within reach.