Is Matt Moore tipping his curveball?

Share All sharing options for: Is Matt Moore tipping his curveball?

When the Phillies played the Braves last Sunday night, the ending of the game was the thing that kept it in the public conversation for most of the week. It could have been the whining from Braves fans, the hand wringing over replay from the national media, or it could have just been a really good game, whatever it was, people were talking about. For fans of the Phillies, they were looking at it as “Hey, a win is a win!” The game featured some offensive fireworks and solid bullpen work (outside of Sam Coonrod’s allowing a moonshot to Ronald Acuna). What it didn’t feature was good starting pitching from Matt Moore, something that has happened in two of his two starts this year. He hasn’t gotten off to a good start as offenses have bashed him pretty good. Judging by some of his StatCast data, there isn’t much there to be hopeful that Moore is going to turn it around either.

But it’s a comment made by Alex Rodriguez that got the ol’ brain a’tickling here. It came in the fifth inning, Moore’s last of the game. Facing Dansby Swanson, even in the count at 2-2 when Rodriguez said the following:

“If I’m Matt Moore and I’m going to be reviewing my own video, maybe tonight or tomorrow, the way that these right handed hitters are taking these breaking balls, you may think they may have something. He hasn’t gotten one chase on a curveball, not one, but it’s not that they haven’t swung, it’s how comfortable they take it.”

Swanson promptly struck out on a changeup, because of course, but the point still remained. Prior to that, batter were 3 for 9 on his slow stuff during that game, something that has become somewhat of a pattern this year. In fact, through three starts, Moore has thrown 31 curveballs (14.1% of his total pitches) and has gotten two swings and misses on it. So, there needs to be a little bit of questioning if Rodriguez was on to something. We all know that Rodriguez is prone to going off on tangents about complete and utter nonsense about the game during a normal telecast, but even with the steroid use he did, he was still an outstanding hitter that was at the top of his craft for many years. If Rodriguez is wondering something this specific about a pitcher, there has to be something behind it.

That leads to another question: if the team knows it’s coming and can look for it in a certain spot, would they just let it go by? If they are aware of a certain tell a pitcher has, how he holds his glove with the ball in it, how he releases the ball, can they simply ignore 25% of a pitcher’s arsenal during a game?

There are two ways to look at this: video and data. Looking at the video, there doesn’t seem to be much of a difference in the usual stuff: glove placement, spread of the fingers of the glove, the usual suspects (or at least the ones discussed in the open among past victims).

Let’s look at two videos here. The first is one of a curveball and the second is of a fastball. Both are in the same game, both have a situation where a runner is on base and both have the same camera angle. See if you can see what I’m looking at.

Now this could be my untrained eye, but it looks to me like Moore’s arm is noticeably higher at the top of his motion on a curveball than it is on a fastball. So, I freeze framed each motion as best I could and compared them. The results are below, with the curveball on the left and fastball on the right. 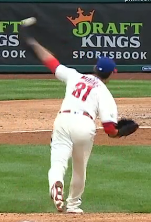 You have more spine tilt with the curveball than with the fastball, possibly the result of trying to get on top of the ball more, which would create a different pitching motion. However, it doesn’t seem to be too conclusive, so we go to the data and see if there is a difference in the release point at all.

You can see that there is a pretty consistent match between the offspeed stuff and the hard stuff when it comes to Moore’s release point. There is a difference, but probably not a lot of a discernable difference to matter when it comes to what the hitters are looking for. Remember, hitters only have a few tenths of a second to see the ball, recognize the spin, decide whether or not they are going to even swing, then put that swing in the correct plane to make solid contact with the ball. If hitters are able to add in telling pitches apart based on where it is coming from at the top of the motion, that is a skill that is almost unheard of. Maybe they can do it, maybe they can’t. It just seems like it’s pretty unlikely that hitters are able to tell Moore is going curveball based on where his arm slot is, especially when the difference in arm slot between hard stuff and slow stuff is only a few inches.

So, now we’re left to guess if Rodriguez is right. Here is the spot where we say: we just don’t know. When hitters have figured out what a pitcher is going to throw and relay via word of mouth (as opposed to banging on a trash can), they’re probably loathe to expose that knowledge to the outside world. They don’t want to eliminate their small advantage over the pitcher by having a few leaky mouths open up. Word might get back to the pitcher, who in turn might make a needed adjustment to increase effectiveness. But with Moore sidelined while in Covid protocol, now might be the time to take a look at everything that is going wrong to see if an adjustment can be made. If he wants to remain in the rotation, that adjustment will have to be made very soon or he’ll find himself with a different role sooner rather than later.