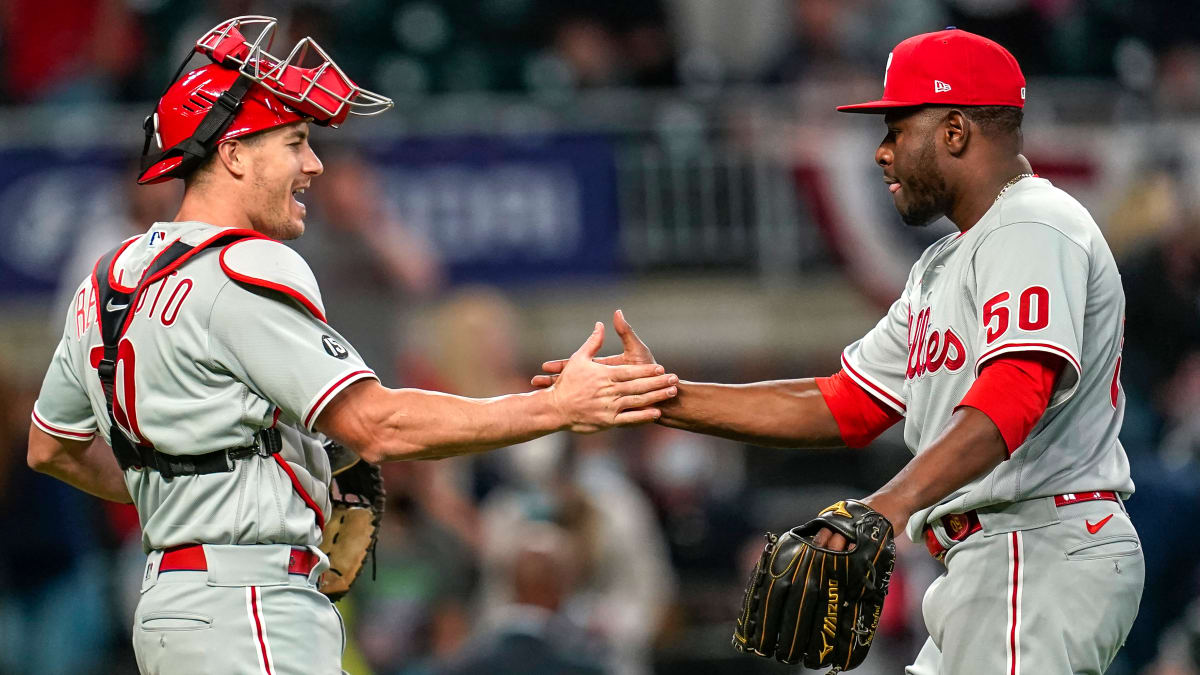 We're just about 20% done with the 2021 season, so let's take a look at some of the good (and not so good) so far from the Philadelphia Phillies.

Remember how the NL Central was supposed to be a big meme division? Where 80 wins probably could've gotten you the crown as the division champions? And remember how the NL East was supposed to be an absolute powerhouse, with a dogfight between the Phillies, Braves, Mets, and even the respectable Nationals too (sorry Marlins fans, your team is still very respectable too, and highly promising)?

Well, the jokes on us. We've become the meme division.

15-15 is currently leading the division right now. The only team with a positive run differential is the Miami Marlins (look at that!), and they sit comfortably in... last place.

But for now, our focus is on the Phillies. And so far...

The worst part about this team is that it feels impossible to decide how you feel about them. One day they rock, the next day it's over by the first inning. Regardless, there's still a good amount of the season left, and that means plenty of time for things to settle in stone. After all, it's too early to say what'll happen from here. Sample sizes are still small.

Well, he certainly came from nowhere.

I guess "out of nowhere" isn't fair. He was 13th in the team's top 30 prospects last year, and started this year in 18th, so he wasn't some non-prospect guy who came into the team out of desperation. But he wasn't a top level, high-regarded prospect either. Regardless of all of that, he's been a pleasant surprise since his promotion to the big leagues, already slashing .327/.364/.423, with a .345 wOBA (.340 is considered above average) in his small sample size of 55 plate appearances. He started his career by hitting in six straight games, and he's already had six multi-hit games, including a 3 hit game in just his third MLB game. He's been a great fill-in for Jean Segura, and his bat NEEDS to stay in the lineup.

Currently out day-to-day, Bryce Harper has been the catalyst for the Phillies lineup, helping them get through some tough stretches where nobody seems to hit. He's an early MVP candidate, already. He's slashing .317/.446/.598, and absolutely nothing says that he won't sustain this success. If you think his face stats are good, take a look at his expected stats:
.373 xBA (100th percentile)
.814 xSLG (100th percentile)
.526 xWOBA (100th percentile)
Uhhh... what?
If the Phillies are going to swipe the NL East out from teams like the Braves and Mets, or even just take a wild card spot, Harper will be a big reason why, and there's no reason to think his success can't hang around. Actually, as shown here, there's more reason to think it could get even better. Obviously, he's not gonna finish the year hitting .370 or have an .800 slugging percentage, but with the amount of hard contact he's been getting consistently, don't think he can't find himself in the MVP race this year.

When Coonrod is being talked about, it's almost unavoidable to mention his political beliefs as well. And while yes, some of the things he had to say about the Black Lives Matter movement are rather... flawed, I'd like to take a second to divert away from that Sam and focus on the one on the field, playing the game.
Because oh my god, he could be a steal.
There's plenty of time for everything to blow up in his face sure; that's the same for everyone here. But there's very little reason to think he can't sustain his success. For God's sake, he throws 100 MPH sinkers, and in case you didn't know, I'll tell you now: That's not normal. The stats backup his success too: he's got a 1.23 ERA in his 13 appearances, ranking in the 95th percentile for xERA, 88th in average exit velocity, and 84th in hard hit%. His control issues from the past seem to have been kept quiet this year too, as evidenced from being in the 92nd percentile for BB% too. Did I mention his sinker hits 100 MPH?
Look, I get he's got some... questionable beliefs. It's totally fair to find it hard to fully root for him because of it. I agree with the sentiment that his politics are problematic. For the sake of this, I'm willing to just dissect him as Sam Coonrod, the pitcher. And let me tell you: He may quietly become something special.

I don't feel like I need to explain this. He's one of us. You really can't hate the guy.

And boy, the Phillies do have some bad too.

Sam Coonrod and Bryce Harper both have beautiful Baseball Savant pages that I think are totally worth it to take a glance at. All reds, all high number percentiles, just... chef's kiss (Harper has one blue mark, a 14th percentile mark in whiff%, but who really cares).

David Hale, on the other hand...

He certainly does have a page on Baseball Savant, that's for sure.

Outside of a 62nd percentile hard hit%, indicating that it's not all just hard hit balls against Hale, it's basically all blue. And all very, very bad.
Avg Exit Velocity: 34th percentile
xERA: 15th percentile
xBA: 12th percentile
Barrel%: 17th percentile
You know how Bryce Harper has such amazing expected numbers that it seems almost impossible? Hale kinda has the same, except it's so amazingly brutal it almost doesn't feel real. And yet, Joe Girardi still likes trotting him out there in key situations, with Hale constantly falling short. To be fair, that does also shoulder some blame to Joe, but we'll get there. Trust me.
And if you like more traditional stats, and can't really read into advanced metrics and expected stats that well, no shame. It still proves he's not good. A 6.57 ERA and 1.46 WHIP don't really instill too much confidence into me.

I could've also just generally said centerfield as a whole, but there's a bigger chip on Herrera's shoulder. It felt all but unavoidable he would get a second chance, and... it's been awful. First of all, him getting a second chance at all is bad enough, and I even wrote an entire piece dedicated to why Odubel's second chance will lead to more harm than good, no matter how he performs. So, the least you could do is just not absolutely suck as a player, too.
And he's doing exactly that. Being an absolutely awful player.
His defense has been meh. His offense has been, well...
His only two hits are infield singles.
He's sporting a laughable .203... wait for it... OPS. That's right. His on-base percentage, plus his slugging percentage, equates to a .203 mark. That's not even a passable batting average. He's already a bad person, and this definitely doesn't help how I feel about him.

Did you expect Matt Moore to sustain some of his success from the spring? I sure didn't.

And yet he's somehow managed to completely fall short of my expectations.

The end line for the verses of AJR's song "Way Less Sad" (you've probably heard it on ESPN, Sunday Night Baseball to be exact) goes like this:

Which is pretty fitting for the expectations on Moore.

But then the following line in the pre-chorus goes:

And it's so far has been everything BUT ok so far.

If you thought David Hale had a bad Baseball Savant page, Matt has an even "Moore" comical one.

The best thing on there is his 53rd percentile chase rate. Otherwise, nothing on there is higher than the 35th percentile. And it doesn't look any better on his face value stats. 9.82 ERA, 2.36 WHIP, I mean, 3 starts is all he should get. I can't believe we finally found the pitcher that has actively AND justifiably made me say "yeah, Vince Velasquez would be an improvement over that guy." His sample size is smaller due to missing time on the COVID-related IL, and hopefully him and the rest of the people around him are ok (I don't think it was specified that he had it, but with the amount time he missed, I'm assuming he did).
On that note, let those 3 starts be the only ones he has.

You know, I'm starting to wonder if Kapler was a perfectly fine manager, and that if he actually had a decent group of guys that weren't constantly hitting the shelves (remember how every guy on that 2019 roster seemed to be getting injured? Fun times), he would've turned out fine.

Joe Girardi still seems to be turning out.

Make that 2 AJR references. God, I have to stop.

Anyways, Girardi still seems to be trying to figure out the right moves, and he's still got a lot to learn, it seems. The man who won a World Series, coincidentally, against us, is still yet to discover that he can pinch hit guys and NOT have to keep them in the game. His bullpen management is... questionable (see bringing in David Hale in clutch spots for more info), leaving the Phillies to have to rely on their starters to go deep into games, with their better relievers being totally wiped out. And while that may not be an issue for Nola, Wheeler, and Eflin, there's only been one starter to go 6 innings that isn't one of those 3. And that man is none other than Vince Velasquez. By the way, he didn't start the year in the rotation, he just kinda forced his way in once Moore hit the COVID IL (and I'm sure Moore's play didn't help his case).

Needless to say, there's gonna be some questions about whether he can stick around here much longer if this team doesn't make the playoffs this year. There's time for him to figure it out, especially since the NL East seems to be one big "tank train," as I like to call it, but when the rest of the teams start figuring things out, there's gonna be very little room for mistakes, and just bad management in general.

So as we begin wrapping things up here, I offer this to you:

The NL East teams are still trying to figure themselves out now, as is the rest of the MLB. I don't think Yermin Mercedes will finish the year as one of the best hitters in the game. I doubt the Pirates early success will hold. I doubt the Giants will sit atop the NL West standings (but don't sleep on them either). Hell, I doubt our own Sam Coonrod will be one of the better relievers in the NL by season's end.

Maybe I'll be completely wrong though, and we'll be looking at a wild Mariners-Giants World Series matchup. Maybe "The Yerminator" will win the AL MVP. Maybe Sam Coonrod will win the NL Delivery man of the Year, and maybe Girardi wins the NL Manager of the Year.

One month is too early to jump to conclusions. But, it still is worth taking a look at some of the things we're seeing early in the season.

And who doesn't want to fantasize about the idea of the Phillies sneaking away with the NL East crown? Or maybe even a Bryce Harper MVP campaign?

It's still early, but baseball is a weird sport. Anything can happen.