Share All sharing options for: Let’s see if we can diagnose what’s “wrong” with Aaron Nola

Aaron Nola is still an ace. Let’s just get that out of the way.

However, he has been pretty mediocre lately, and for a team that has playoff aspirations, that’s a problem. Since he threw a complete game shutout on April 18, Nola has made nine starts, throwing 50 2⁄3 innings in those starts. He has a 4.97 ERA during that stretch, allowing nine home runs, a .270/.324/.464 line, but still maintaining a 57:14 K:BB ratio. He’s been extremely inconsistent and not at all what the team envisioned when they looked at their rotation on paper to begin the season and nodded with a grin. There are still people who believe that Nola is an ace (including yours truly), but for the first time in a while, that position seems to be teetering.

Naturally, we want to figure out what’s wrong. It can only satisfy some people if they can grasp onto an issue that seems to be plaguing Nola, point to it and tell him to fix it. There is no doubt that the team itself is already hard at work doing so, but we aren’t privy to those discussions. In press conferences, all someone will get is that they are working on something and that hopefully it will turn around.

So, let’s do a little bit of a deep dive into publicly available data to see if there are any irregularities that can hopefully point out an issue that will placate the masses. We’ll focus on three different aspects.

Is his stuff different?

Let’s first look at what he’s throwing to see if there is a difference. When we look at stuff, we want to know:

These are all simple things to search and answer. First, the velocity.

Nope, he’s throwing just as hard as he ever has. There hasn’t been a sharp drop in velocity even from game to game that would indicate there might be a hidden injury he isn’t disclosing. Even if we move on to how the pitches are moving, we see that there isn’t much of a change in his stuff from where it was to where it is now. 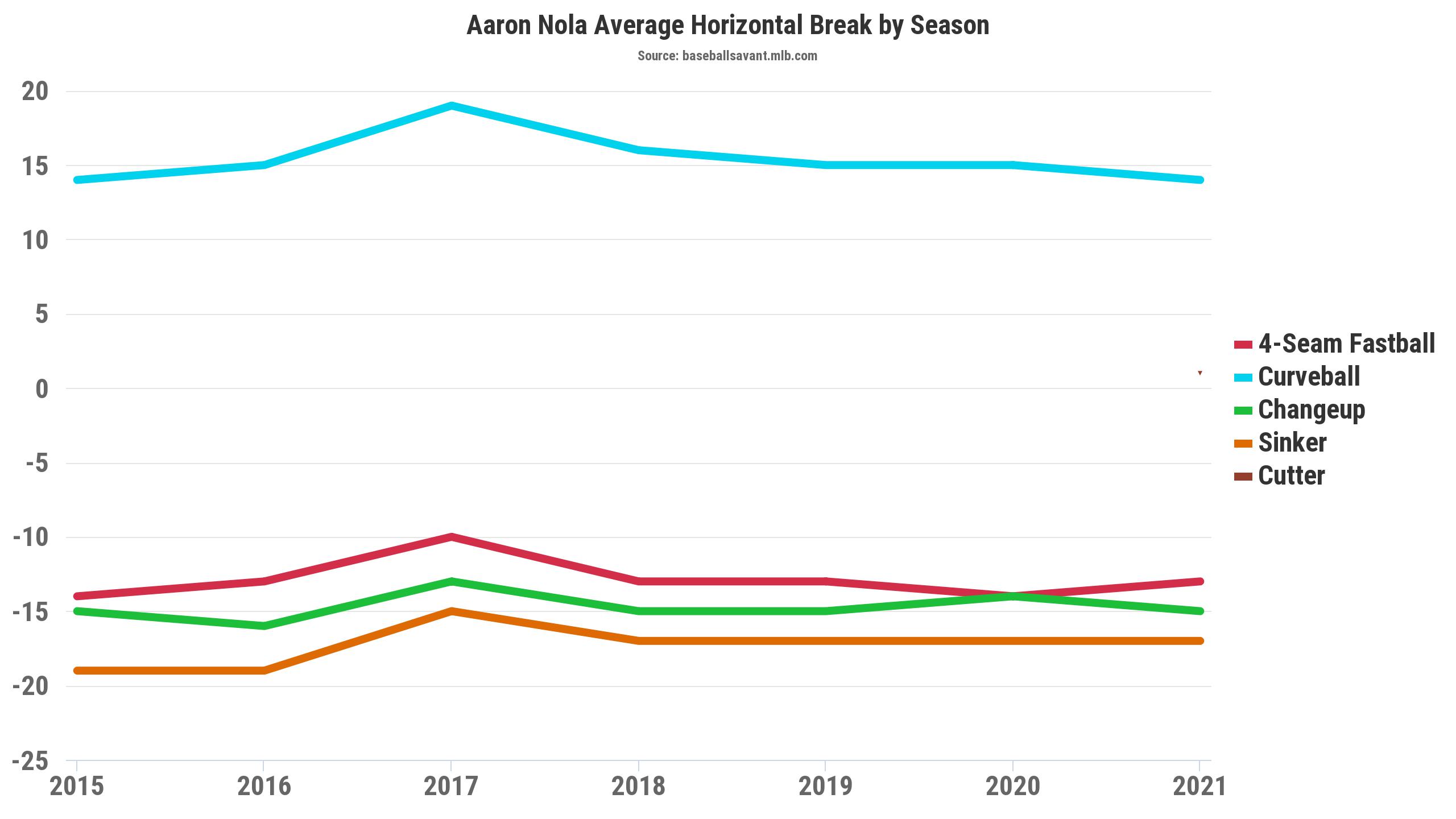 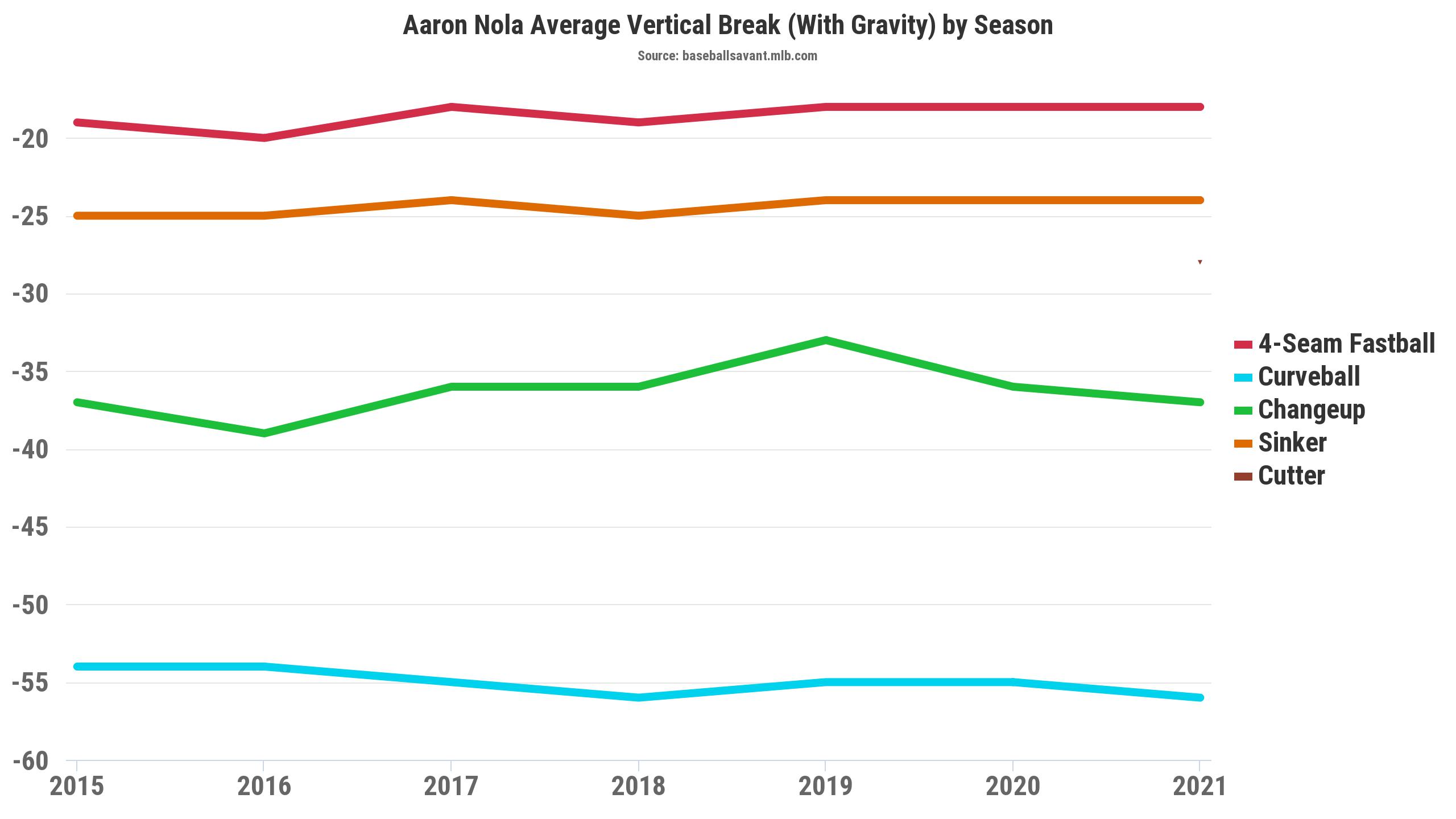 You can see that the horizontal and vertical break on his pitches has been pretty consistent through the years and that remains so in 2021. Nothing has really changed with his stuff. In the words of David Byrne, it’s the same as it ever was. So, let’s see if there is something different with how the team are hitting him.

Are teams hitting him harder?

This is where a lot of the meat of the issues are. First of all, let’s rephrase that initial question. It’s not really about are they hitting him harder, but are they hitting him overall. Usually, we can use things like exit velocity, launch angle, etc. to try and determine if there are changes to how hitters are actually hitting the ball, but we have some stats to help with that already. If we take all of the Statcast information that we can find with some button clicks, bundle it into a ball and spit out what we would expect batters to hit against Nola we’d get his xBA, which is on the trend upward on a (mostly) per pitch basis.

You can see that compared to what he was last year, hitters are expecting to hit most of his pitches for a better batting average than in 2020 outside of the sinker. If we look at how it’s been looking career wise, there been an upward trend on several of the pitches, but even still, not quite sure this is enough evidence that we can say with a definitive answer that hitters are hitting him harder overall. It’s damning, yes, but it just doesn’t feel like it’s enough to point to.

Hitters are hitting him harder on a per game basis, as seen here,

but that just makes sense. Since he has been roughed up lately, you would expect that these exit velocities would be going upward. Pitchers aren’t going to have ERAs near 5 if the exit velocity average is stable or headed downward. So, we can’t really point to this and say “Teams are hitting him harder! That’s the problem!” We still need to figure out why.

Is he just unlucky?

The easiest route to help diagnose Nola: he’s unlucky this year. His BABIP in 2021 is .323, almost 30 points above his career average. So it’s partially correct. We’ve seen that he isn’t really changing his stuff, nor are teams really raking against him. He’s just gotten unlucky when hitters hit. But again, it feels kind of cheap to say that he’s unlucky especially when he’s the one making the pitches.

However, there are some changes to how when they are hitting him.

Paul Boye has been at the vanguard of trying to figure out Nola’s issues. The other night against Atlanta, he sent out some interesting information.

Nola has been pretty bad this year with two outs. It’s probably one of the weirder stats with Nola, so it makes you wonder if there is an issue with him and two outs this year. That can’t be the only thing “wrong” with Nola, but look at that slugging percentage with two outs.

This issue that Nola is something that might seem fluky, but at the same time, it is something he can control to an extent. particularly when it comes to allowing home runs. That is a thing that pitchers can control.

There is also this: runners on base, particularly when they are in scoring position. When runners are on base, Nola has gotten worse:

When they are in scoring position, Nola has really struggled.

And that there is the most pressing issue when it comes to Nola’s 2021 season. He’s been pretty bad when runners are in a position to score, something that he has done well against in the past. Sure you can see that he still gives up his fair share of hits when the runners are 90 feet closer to home, but that slugging percentage when runners are in scoring position is just mind bogglingly bad. Is it the main reason he’s been “bad” lately? Maybe. It’s still hard to diagnose, but if one is looking for something to point at that will help explain the issues, then <gestures wildly>.

Many pitchers before Nola have had rough stretches where they look uncharacteristically bad. Many pitchers after Nola will also have similar stretches. What we are worried about is this stretch right now. Can Nola come out of it? Of course he can. To say that his stuff isn’t that good is absurd (an idea floated on sports radio). Will he come out of it? That’s a different issue. We’ve seen Nola in the past have a few rough starts in a row only to then start getting back to his ace-like self again. That has to be the expectation for Nola as the season progresses.

He’s done it once. He’ll do it again.