Too much sentimentality amongst the fans could be an issue

I wish Cole Hamels all the success in the world. As a person who grew up in the late 80’s/early 90’s, I remember what it was like to see homegrown talent never come to fruition in Philadelphia. They had Scott Rolen and.....Wendell Magee? So when Hamels came up to the team and formed the nucleus of a championship team, it was a magical thing to behold, seeing the team draft, develop, promote and win with their own players.

Flash forward to now. Cole Hamels is going to throw a showcase for interested teams Friday, hoping to show enough to warrant a major league contract that will give him another day to bask in the major league sun. The Phillies should not be that team.

2020 was a year to forget for everyone, Hamels especially. He, like the rest of the world, had to deal with the uncertainty of his life thanks to the pandemic, but also had to deal with a shoulder issue that would eventually only allow him to throw three innings for the Atlanta Braves, essentially stealing $18 million from them (prorated, of course). After that, he was let go and was in baseball limbo. Not quite retired, but also not playing for anyone. No minor league deals, no spring invites and certainly no major league job. In fact, prior to June 15, there was no news at all on Hamels. At that time, we heard that he was throwing and preparing for a showcase.

Cole Hamels continues to throw off a mound and is building up every day but has not scheduled a showcase yet. Potentially, a bigtime midseason pickup.

Now, almost a month later, that showcase is here. He’ll throw today for at least 10-15 interested teams, perhaps more that haven’t been identified. The need for quality pitching during this coming second half will intensify, meaning anyone who has shown something in the past will get consideration either by trade or by free agent signing. But what will teams be getting?

Of course we cannot know what Hamels will look like until he actually throws, but we do know three things:

We’ll get back to #2 in a second. With #3, we can go to Baseball Savant and take a quick looksie at his numbers in the two seasons where he was pitching full-time. Folks, I hope you’re a fan of blue, because there is a lot of it. 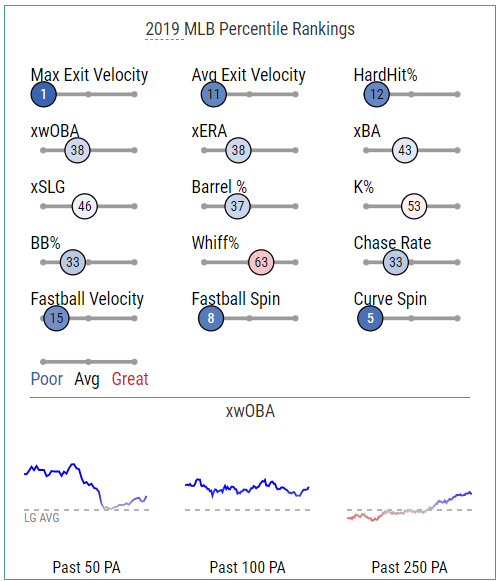 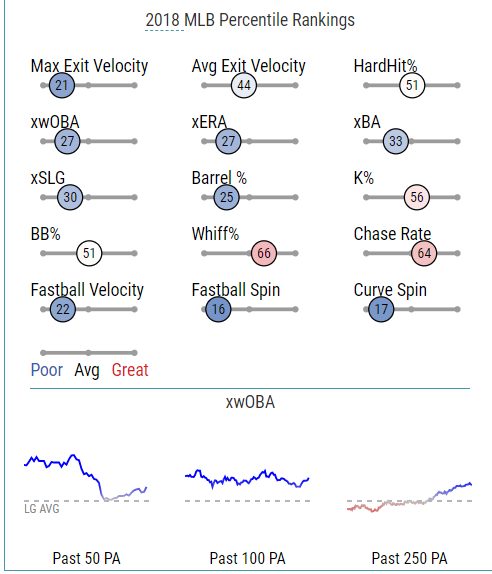 Of course, expected stats are taken with a grain of salt by some, but the sentiment behind that and the stuff you see in the sliders remain the same: Hamels’ stuff was declining prior to 2020. We haven’t even discussed the fact that he was seeing a rise in his walk rate and in his home run rate prior to 2020, though some of that can be attributed to the ballparks he was playing in. Nevertheless, it’s still a piece of evidence that the Cole Hamels you and I remember is not the Cole Hamels that exists today.

Now we have to add in the fact that he’s 37 years old! He’s coming off of shoulder and triceps issues that limited him in a significant manner in 2020 and presumably hadn’t subsided enough to allow him to even attempt a showcase prior to July. Do you really think that it is wise for the team to use the presumed limited resources on an aging pitcher with a very recent injury history to the arm he’ll be using this season? Hmm.

The pessimist in you (and me) would point to the fact that the Phillies would be using Hamels as a substitute for one of Vince Velasquez or Matt Moore. I will not argue to that a rotation upgrade is needed if the team wants to make the playoffs. Assuming they get into the playoffs, the only route will be as a division winner, in which case they’ll need four starters. Three of them are obvious in Zack Wheeler, Aaron Nola and Zach Eflin, but the fourth right now is a major question mark. But to play devil’s advocate, I would point out that Moore’s last three starts since his return from injury, he has not been all that bad; he just can’t get more than 15 outs. Seeing how this team has operated this year, they’ll ride those three “average” starts for as much as they’re worth, hoping that Moore can continue to improve and be that viable fourth starter.

We finally have to discuss the readiness of Hamels, so you’ll have to follow my line of thinking here. As of one month ago, Hamels wasn’t even able to throw a showcase. Now he’ll throw that showcase, but we can reasonably assume that he’ll be at 50-60 pitches if we’re being optimistic. He’ll haggle with some teams, meaning it might be another week before he signs. After that, the team will want him to go and build up some arm strength in the minors, meaning he’ll get a straight minor league deal since he’s not rehabbing anything. How many starts will he need to be ready to pitch in a major league game - 3? 4? That’s at least two weeks before he’s ready, meaning now we’re into mid-August. Even when he is ready, expecting him to go six innings or more each time out is foolhardy. He’ll throw four, five innings each start, hoping those innings are good enough for his team to be in the game. That means he’ll give his potential team 8-10 starts this season. We’re sure that every single one of those starts is going to be good? Hmm.

Now, I can almost feel the gut reaction to this line of thinking. “Cole Hamels will only cost money. Better to sign him than trade prospects.” This is a solid thought. Signing a free agent is more preferable to teams for that exact reason. A team like the Phillies will need all the prospects they can hoard in the coming years if they want to avoid the luxury tax threshold (assuming it isn’t raised with the new CBA) to help supplement the roster.

But we have also seen this owner mandate trades of prospects that could have been of use to the team in order to make sure that teams sending players the Phillies’ way pay down their salaries a bit. Translation: they don’t want to go above that threshold. So if there is money to spend, wouldn’t the wiser choice be on spending it on the innings that have cause the team to most problems? We have seen a lot of leads lately being blown in innings 6-9 rather than in 1-5. Go get a reliever.

Listen, I know that signing Hamels is a good story. The hometown hero coming back for one more go ‘round to try and help the Phillies into the playoffs for the first time in a decade. It would be heartwarming and fun. It’s just doubtful that it would actually work. The holes on this team are too many right now that the limited amount of resources they have should be spent on a pitcher on the decline with a recent injury history. The timing of it all just wouldn’t be worth it to the Phillies, who need that quality starter now, not in another month. Take off the 2008 colored glasses and see the truth: signing Cole Hamels would be a mistake.