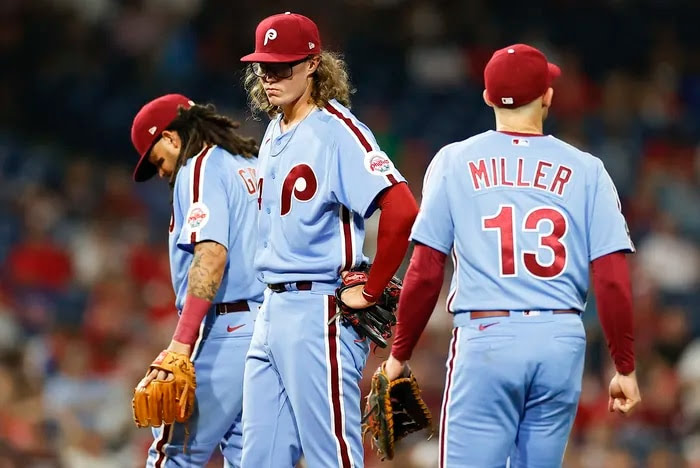 What began as a surprise emergence for fan favorite J.D Hammer turned into a dramatic, heart-breaking implosion when the calendar flipped to September, and the loss of his major league spot.

I knew that if J.D. Hammer was gonna be staying for awhile with the major league team, that I was 1000% writing something about him.

In fact, as August was wrapping up, I was already thinking about all the positives I could be writing about him.

Let me preface this by saying: I am a gigantic fan of J.D. Hammer. Like, I don't know what I'll do with myself if he's playing somewhere else. I don't really have many backup favorite players in mind. Some people probably know me best for being a massive Hammer fan. And truthfully, I find that perfectly wonderful. Anyways, as I was saying...

Well, I did get to write my article on him. It's just not how I wanted to.

What began as a 1.68 ERA entering the season's final month has turned into an ERA just under 5. What started with a brilliant 2.19 ERA in August, a month hurt mainly by a couple rough appearances, has turned into a nightmarish 3.2 innings. A 22.50 ERA with 8 hits and 5 walks allowed is really hurting his chances of holding a spot in the big league ‘pen in 2022. It already cost him his spot this year (at least, for now, but I don't imagine he'll be recalled unless out of necessity). So where did it all go wrong? To start, let's go back a little bit. To the beginning, actually.

Act I- The Beginning

It all started back in June 2016, as the Rockies drafted Hammer in the 24th round of the alright I'm totally kidding.

J.D. Hammer finishes a short but sweet outing against the Diamondbacks, finishing the 6th inning behind Ranger Suarez by recording the last two outs of the inning, needing just 9 pitches. By this point in the season, Hammer was unfathomably good. A sparkling 1.65 ERA, a very respectable 3.17 FIP, and a 1.18 WHIP, revealing that his season, while unsustainable at its current rate, was still very solid, and he could likely keep going with a successful season that could lead to having an important role in the 2022 Phillies' plans.
Or so you would think.
Through a very nice total of 69 plate appearances by this point, a contact related result would occur (out, hit, or error) 43 times. What resulted was a positive .210 batting average against in this span, and an xBA of .204, and just 2 barrels allowed in this span.
There was also an average exit velocity of 91.5 MPH and a 47% hard hit rate on said contact related results.
Now, I will admit that I wasn't able to find all the info I wanted. My method of getting this information was going to baseball savant, going to game logs, switching the results from MLB to Statcast, and setting the "Game Date <=" (where the sample size would end) to 8/30, just to make sure it factored the 8/29 appearance. This doesn't show every stat I would want it to, it does not account for foul balls, and surprisingly the Wayback Machine doesn't have archives upon archives of Hammer's savant pages, all up-to-date for different days. What a bust of a machine (I'm kidding, of course. I think).
Regardless, that is a result that one would call "less-than-encouraging." Even in the 29 times he got an out from a ball in play, said outcomes resulted in a 48% hard hit rate and average exit velo of 91.4 MPH. No matter how good your defense is behind you, if you are getting hit that hard, trouble will come (unless you have, say, 8 clones of Ozzie Smith, who have mastered defense to the level Smith did at each respective position of the clone Ozzie, plus if you have been blessed with Ozzie Smith-like fielding ability. Is this tangent getting too long? I think so).

Act II- Wake me up when September ends

And so September came. For Hammer, he started off just like he had done for much of the season: with a scoreless frame, striking out 2 and yet again establishing himself as a potential key part of the Phillies' future bullpen plans.

Here's how every outing has gone since then:
9/3 (vs. MIA)- 0.1 IP, 2 hits, 2 walks, 2 runs
9/9 (vs. COL)- 0.1 IP, 1 hit
9/10 (vs. COL)- 0.2 IP, 1 hit, 1 run, 1 strikeout (allowed a grand slam to Elias Diaz but was only responsible for one run)
9/14 (vs. CHC)- 1 IP, 2 walks, 1 strikeout
9/16 (vs. CHC)- 0.1 IP, 4 hits, 5 runs, 1 walk, 1 strikeout
Not one clean inning. In this span, he's faced 22 batters.
In this span, he has a 69% hard hit rate (NOT nice) and an average exit velocity of 96 MPH.
I don't need to contextualize that anymore. It's bad. He's given up hard contact nearly 3 out of every 4 times batters connected with the ball for a field result (hit or out). For some, this may be a surprise that he's fallen so far. To others, it was expected. And for me, it was somewhere in between.
Anyways, in what has been a sketchy month for Hammer, it all culminated in a nightmarish, David Hale-esque performance (remember him?) that, in a way, set up one of the greater Phillies wins of the season. Don't tell that to me, though, I'm still reeling in the agonizing feeling of "my favorite player may not have as much of a stabilized future on the team anymore."
Now we've covered the good and the bad, so naturally, let's all bring it together, and tie it with a nice little ribbon.

Let's not sugarcoat it- September was an absolutely, for lack of better words, shitty month. And the reality is, while some advanced metrics were in favor of J.D. and his breakout season, the hard contact rates always hung over his numbers like a dark, ominous storm cloud. And it's not just the hard contact that sunk him either. Hammer's control this season has been much, much sharper than it was when we first met him in 2019. Yet, it still is a problem, and it leads to perhaps the biggest problem of all- his fastball is NOT a plus. It doesn't have much movement to it at all, and it's stuck in a 93-95 range. In an era where pitchers throwing in the upper 90s is increasingly common, something needs to give with his fastball to help regain some of his early season dominance. That doesn't mean add a couple miles to it and go on your merry way, as adding velocity is no guarantee of success (see: the wildly infuriating Jose Alvarado).
There's been so many negatives, that it's rather easy to forget one really important thing: There's been a lot of positives for J.D. this season.

His slider still remains an excellent pitch for him, as he got a 31% whiff rate on that pitch. Opposing hitters hit just .212 and slugged just .242, while the expected versions of those stats show even more pitiful results for batters: an expected .183 batting average and .226 slugging percentage. And all in general, Hammer generated an xERA on the season of 3.75, an xBA of .221, and an xSLG of .331. For people who like xwOBA, his was just a .296 (xwOBA measures a hitter's wOBA, but factors out the defense, creating a stat measuring a hitter's skill based solely on the quality of contact. A normal wOBA at or under .300 is considered poor, for context).

Behind a dark finish to his stint in the majors this season underlies some valid concerns for the future, but also some valid positives as well. It's never too late to make changes for the better, and at 27 years old now, it's not unfathomable for the peak of J.D. Hammer to be just on the horizon.

And besides, a player with thick framed glasses, long flowing hair, and a full name of "John Dale Hammer" is a player that is absolutely too cool to have a poor career. It just simply will not be allowed by the baseball gods.