The Phillies have had some leadoff issues this year. Collectively, they have been getting a .697 OPS out of the leadoff position, good for 28th in baseball. It’s been difficult for them to find someone who could be productive for longer than two weeks and be able to leave him there. In a frenzied search to find that leadoff hitter, they have used 11 players to start the game offensively. Of those 11 hitters, Joe Girardi has penciled in three players the most. Here are the stats for those hitters as leadoff hitters:

That, friends, is not good. Herrera has hit for the most power out of the leadoff position, McCutchen got on at the best rate, but none of these players have produced numbers that scream “START THE GAME WITH THAT GUY!” Segura has been much, much better as a two-hole hitter, something he has said out loud that he prefers. While McCutchen’s ability to get on base is something that would be valuable for a leadoff hitter, one also has to hit the ball and a batting average under .200 is simply untenable. So, as the season reaches its penultimate week, the team is still looking.

So how about Matt Vierling?

Vierling has only had 48 plate appearances prior to Monday’s game, so a sample size isn’t going to be very large. In those plate appearances, he’s hit .313/.375/.432 with a few walks and few doubles sprinkled in. He’s shown some patience, a little pop and a little bit of speed (two steals in as many attempts, 95th percentile in sprint speed). His defensive versatility allows him to stay on the field somewhere depending on the need of the night, so there will always be somewhere for him to play and produce. So why else to put him atop the lineup, other than “who else is there?”

Well, for one, he’s showing a little bit of plate discipline since he’s been here. Looking at these two zone maps, we can see that pitchers are throwing the ball to him down in the zone, hoping to get him to chase, but that he isn’t doing that. He’s not swinging much at those pitches, laying off of them and getting himself into good hitters’ counts. 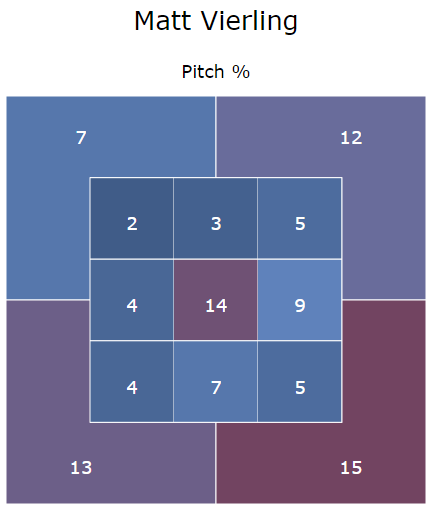 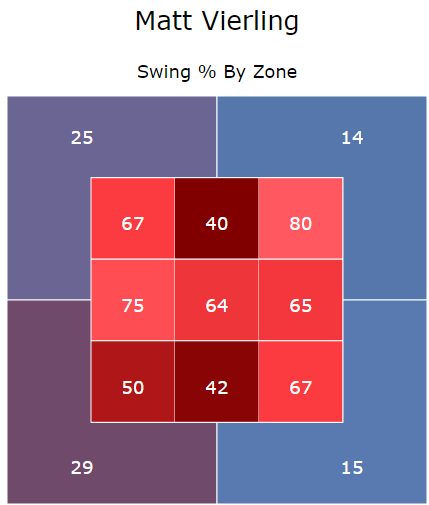 While that isn’t exactly out of the ordinary for someone at the major league level, consider these zones from Odubel Herrera, the player most frequently sitting atop Girardi’s lineup card. 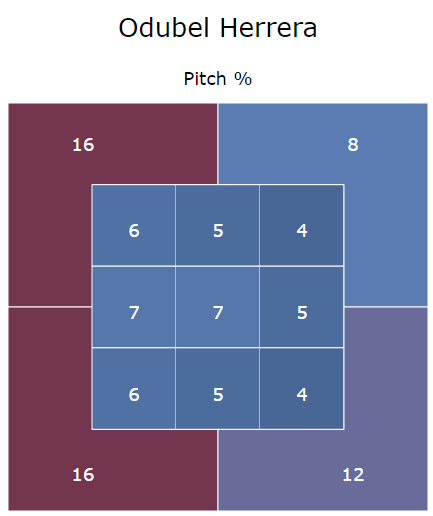 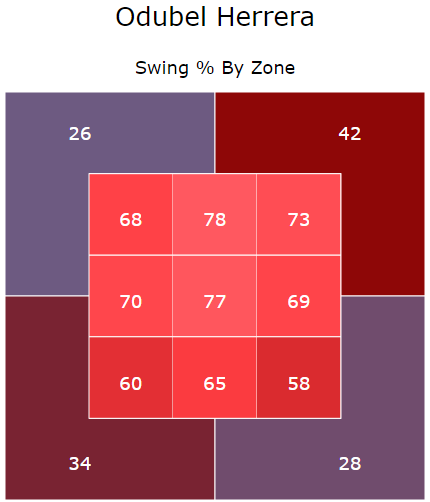 From Herrera, we see much more of an appetite to swing at pitches just off the fringes of the strike zone. Now, one of the drawbacks of these maps is that they aren’t granular enough to see if those pitches that Herrera swings at are close enough that they might be called strikes. Even if a pitch is just a hair off of the strike zone, one that might be appear to be something he can do damage with, according to this, it counts just the same as one in the upper corners of the box. So, we do exactly that, go a little more granular to compare each player to each other.

Here is what the players are swinging at on a much smaller scale. 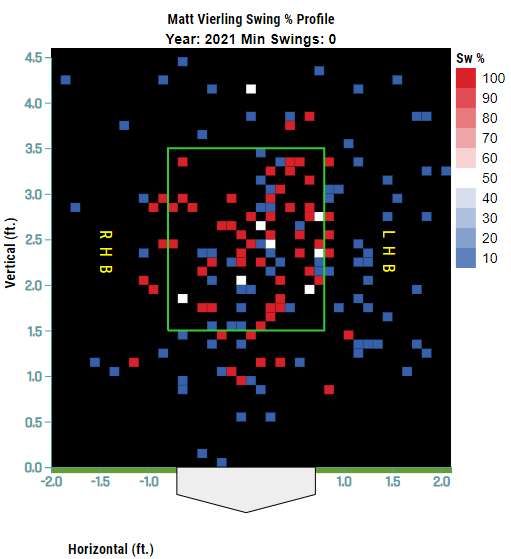 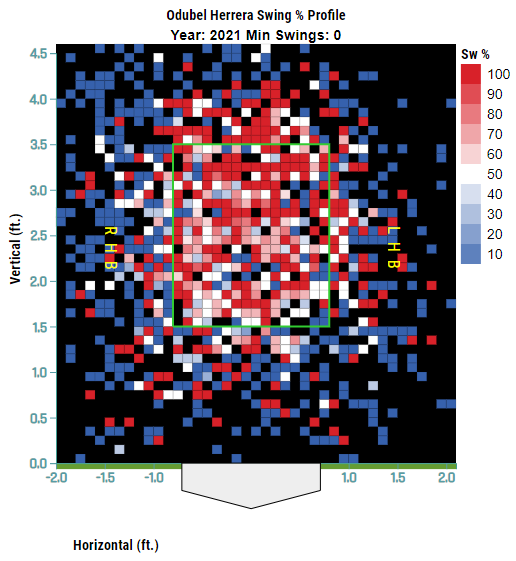 Granted, the amount of pitches Vierling has seen plays into the small sample size argument, but it’s pretty clear that this season at least, Herrera has been more willing to expand the strike zone, thus getting himself out more often by swinging at bad pitches. Vierling, in his young career, looks like he has more control of the strike zone and will only swing at something that is within or close enough to it. Can that strike zone judgement be maintained through the end of the season? That would remain to be seen.

Looking to see if he had been projected like this, Vierling’s scouting report shows that he does have at least a decent eye at the plate.

The right-handed-hitting outfielder has shown a pretty solid approach in pro ball, especially in 2021, when he’s kept his strikeout rate very low while drawing a fair amount of walks.

In Matt Winkelman’s assessment at midseason, he also mentions that his on-base ability is solid.

Vierling’s only extended pro time involved a year in Clearwater where he clearly wore down. Vierling has come back from the time off by hitting for power, with a good on base rate. He can play all three outfield positions and is playing some 1B and 3B to add versatility as well. There might be enough things here to make Vierling an everyday outfielder, but it is more likely he is a bench player where his added positional flexibility makes him very interesting.

If these reports are any indication, the ability to control the strike zone is something that Vierling has shown an ability to do in the past, so continuing to do so at the major league level shouldn’t be an issue. That might change once the scouting report on him gets passed around, but for the rest of the season, it should suffice.

Girardi’s preference for putting veterans at the top of the order is pretty clear. With the team fighting for every win they can get at this point, getting people on base in front of Bryce Harper should be the top priority when considering the nightly lineup. At this point, putting Matt Vierling there should be a consideration.