The game within the game: World Series Game 1 - Verlander’s fastball against the Phillies’ lineup

It’s a fascinating thing to watch in this series

Share All sharing options for: The game within the game: World Series Game 1 - Verlander’s fastball against the Phillies’ lineup

Each game of this National League Championship Series, we’re going to take a microlevel look at an intriguing matchup of the day.

The Phillies have a shot against the Astros. No national prognosticator, soothsayer or other “expert” should convince you otherwise. Anyone predicting a sweep either hasn’t watched the team play this month or is simply looking for you to subscribe to their newsletter. However, the task is tall for them, make no mistake. Houston is a well-oiled machine that is going to bring the full weight of its system against the Phillies and that starts tonight with Justin Verlander.

Philadelphia Phillies games are now available to stream on Sling TV! Which gives you even more accessibility to the Phillies, no matter where you are watching from. Sling TV lets you stream live TV and on-demand content over the Internet on any device; access free DVR storage; and choose from a selection of packages including Sports Extra or NFL RedZone. Order now and get half off your first month of Sling Orange or Sling Blue (regular price $40, now $20 + add any Extra package for half off too!)

By now, you may have heard about Verlander’s struggles in the World Series. In seven career starts in the Fall Classic, he has an ERA of 5.68 and has had particular trouble keeping the baseball in the ballyard (nine home runs in 38 innings). It’s something to watch, of course, since we all love to see trends and if they continue to play out. However, we as astute watchers of the game know that that, by now, means pretty much nothing. This version of Verlander is different from the last time he was in the World Series, which was different from the time before that and so on and so on.

With his arsenal, Verlander has been pretty much the same kind of pitcher for years now: he lives and dies with the fastball and curveball. If you go to his Baseball Savant page, you might start to notice that he has been this way for some time now. What is starting to be different is how much he has bought into the new philosophy of pitching, that being hard fastballs up, curveballs down. Specifically, his fastball has started to creep up in the zone as the years have gone on, while his curveball has started to go lower and lower. Since he uses it so much, let’s zero in on the fastball.

Hitters this year only his .194 with a .285 slugging against his fastball, which had a run value according to Baseball Savant of -24 runs, in the top percentile in the league. It’s a superb pitch, one that he’ll undoubtedly feature against the Phillies. What’s been interesting is how, as mentioned before, he has changed the location of that pitch over the years. You can see that here, in these slides, comparing his 2022 fastball location to that in 2018. 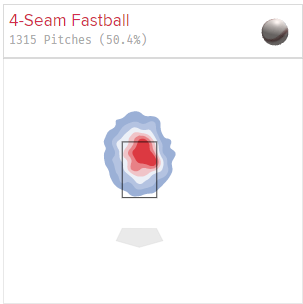 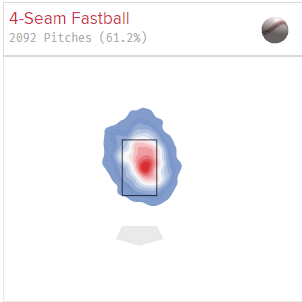 He’s starting to go higher and higher with it and for the Phillies, that might cause an issue.

The Mariners, in their game against Verlander and the Astros, had an approach to him where rather than letting him get to a possible count that would involve one of his breaking pitches, they simply went after a fastball that was in the strike zone and converted.

They hammered Verlander to the tune of ten hits and six runs over four innings, knocking him from the game and being the only team to really have Houston on their heels during this postseason. There is probably an air of familiarity that Seattle had against Verlander having faced him six times this season, but that is also something they could have seen in a scouting report. Assuming the Phillies have been scouting each team involved in the playoffs this year, they likely saw the success Seattle had against Verlander and will look to duplicate it.

One issue that they could have is that we’ve seen them struggle with a fastball higher in the zone and just in the shadow zone around it. Brandon Marsh has been particularly susceptible to the pitch lately. If the Phillies are going to have a shot in this series, they’ll need contributions from everyone in the lineup, so someone like Marsh will be critical to their success.

Another thing to watch for is the umpire calling the game. If that umpire is calling a high strike, it is going to help someone like Verlander a great deal. There won’t be any reason to throw a pitch lower in the zone if he can consistently get one higher and just outside the defined strike zone called for a strike. It’s a two way street and Aaron Nola will want the same courtesy, but it’s just another wrinkle in this matchup between a hot offense and a top starting pitcher.