The title is a stretch, I know, but they might be able to peddle some arms for the Phillies

Share All sharing options for: For a good (relief pitching) time, call 867-Detroit

In the offseason, you’ll see a lot of pieces written by the national writers about how a certain team has a plethora of options available to help other teams looking to match up in a deal. The Marlins are so far the most talked about team as they have many starting pitching options they can trade from even though the old adage of “you can never have too much pitching” could and should apply to that situation. For Ken Rosenthal, he has identified the Tigers as a team that could help those looking others when it comes to that most volatile of positions: relief pitching. From Rosenthal’s weekly rumors piece:

The Tigers, too, are a popular target in trade discussions, especially with the eruption in the free-agent market for relievers — five years, $102 million for Edwin Díaz; five years, $46 million for Robert Suárez; three years, $34.5 million for Rafael Montero.

Those deals caused sticker shock for a number of clubs, prompting them to explore trades instead. The Tigers held Joe Jiménez, Gregory Soto and other relievers at the deadline, then finished the season eighth in the majors in bullpen ERA. Keeping their ‘pen intact might help the team better compete in 2023. But even with lefty Andrew Chafin opting out, it would not be a surprise if new president of baseball operations Scott Harris took a more creative, aggressive approach than his predecessor, Al Avila.

I will admit, I did not watch much Tigers baseball this season. A popular preseason “pick to click” if you will, they did not click hardly at all. In fact, they kind of fell apart. Injuries, ineffectiveness and bad luck had them sink towards the bottom of the American League Central, fire their general manager and give off a look of a team that is suddenly thinking, “Now what?” If all of their young players play better next year, there is the off chance they make some noise near the bottom of the wild card chase, but it’s more likely they are rebuilding yet again. So, the sensible thing would be to grab some assets from other team in exchange for some of these relief arms that might get expensive starting soon. Let’s take a quick look at a couple of those names.

Soto is probably the most famous one out of the bullpen due to his stellar 2021 season that resulted in his being selected for the All-Star Game. You could argue that his 2020 season, though shortened, was better than 2021, but he still was every bit as good. Though some there were some serious control issues that year (14.5 BB% - yikes), he made up for it by striking out a healthy amount of batters that same year (27.5%). He was throwing his sinker and four seam fastball extremely hard, averaging over 98 miles per hour with each pitch, and backing that up with a slider that hitters would swing and miss at 43% of the time they saw it.

The issue with Soto was that a lot of the things that made him good in 2021 slipped a little bit both in terms of stuff and in terms of results. He still had the same velocity he was working with in 2021, but hitters just weren’t swinging and missing as much as they were that year.

That, in turn, lead to his strikeout rate dropping (down to 22.8%) and hitters hitting the ball harder more often (43.2% hard hit rate in 2022 vs. 35.8% in 2021). For a guy that relies on being able to either blow hitters away or get them to chase a slider, these are the types of trends one would not want to see.

Now, Soto is eligible for arbitration for the first time this year and thanks to his racking up a ton of saves with Detroit, that number is currently projected to be $3.1 million. Not expensive at all, but still a higher starting point for a pitcher that doesn’t have a firm grip on a closer’s job should he be moved to a team like Philadelphia. There is still a lot of team control left, so the price tag on Soto would be high, so maybe this isn’t the area the team would like to look in Detroit.

If the Phillies were to look at Detroit for relief help, this is probably the guy they should be staring down.

Jimenez feels like he has been around forever: hard throwing right handed reliever, strikes out a fair amount, good control. Sound familiar? If you’re like me, I always think of Joel Zumaya when I think of this kind of player from Detroit, but Jimenez has actually been much better. Jimenez is probably what Detroit Zumaya would turn out to be.

Taking a closer look at Jimenez’s season, there were a lot of positives to take away. Pretty much everything you look for in a reliever went the right direction. Like - everything. 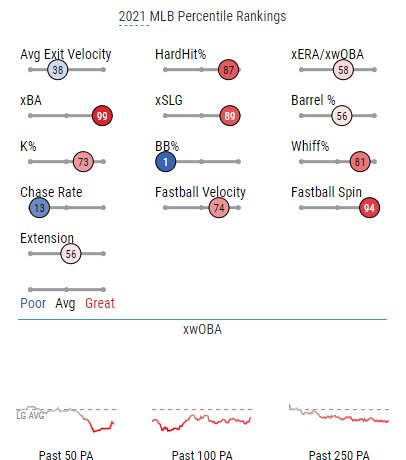 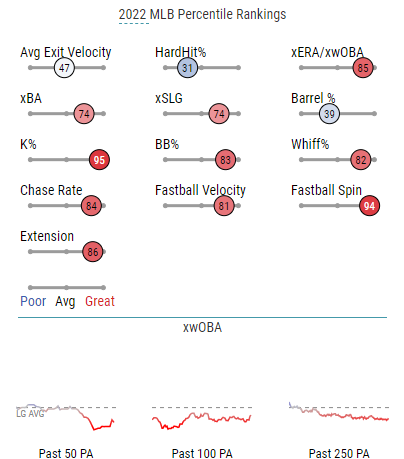 He threw harder, got more hitters to chase, didn’t walk as many batters and had himself a much better season. If there was one red flag, it’s that his hard hit percentage climbed into a bad percentile zone, but that is something another pitching coach could work with. Maybe it’s a case of a different pitch mix, maybe it’s working on better location within the zone and on the fringes, something. Even with all of that, the traits are there for a team like the Phillies, who have had decent success lately helping relievers improve their game, to unlock a little something extra in Jimenez.

Looking at money, Jimenez is arbitration eligible this season for the final time, projected at $2.6 million, much more palatable for a team that would be acquiring his particular set of skills. If the Phillies were to move on a reliever from Detroit, this looks like the likeliest target of all the names mentioned by Rosenthal.

Of all the names that Rosenthal had mentioned, Lange is probably the least known quantity, but might be the most difficult to pry loose. For a while a top Cubs pitching prospect, Lange was traded to the Tigers for none other than Nick Castellanos at the 2019 trade deadline. Once there, Lange was converted to a full-time reliever where he has actually thrived. All of his pertinent stats went in the right direction, including his strikeout rate, walk rate and home run rate. He averages in the mid 90’s with his fastball, but he really, really loves his curveball. Like, “loves it 50% of the time” loves it.

For good reason too, as that pitch got hitters to whiff about 58% of the time he threw it. He’s controllable for the Tigers or any team he pitches for all the way through 2027, so you’d have to think the team acquiring him would have to pay a hefty price. Were that team the Phillies, you’d have to think the price tag would begin with one of the top three starting pitching prospects.

The issue with that price is that Lange still isn’t a known quantity in the major leagues. He had a good 2022, but his 2021 debut was a bit rocky, though still promising. Not sure that if the team wouldn’t part with one of the trio of pitchers for a more immediate need at the deadline they would do so for only a relief pitcher, albeit one with Lange’s talent and upside.

These are, of course, just a few names that are possibly available via trade. We don’t know what the asking price might be for each player, but considering that relievers are getting five year deals and/or $10+ million per year, the Tigers would be wise to shop these guys around. The Phillies would be wise to ask about them. We’ll have to see if there is a possible match.