The game within the game: World Series Game 5 - J.T. Realmuto against his own instincts

Some observations from Game 4

Share All sharing options for: The game within the game: World Series Game 5 - J.T. Realmuto against his own instincts

Each game of this National League Championship Series, we’re going to take a microlevel look at an intriguing matchup of the day.

Tonight’s matchup: J.T. Realmuto against his own instincts

Most of the time when watching the World Series, the number one thing fans will complain about is the bias against their own teams. Joe Buck had to endure this for years, each city wondering why he hated their team so much. This year is no different. Fox’s new play by play guy has, for the most part, been pretty good staying in the middle of the road, so much of the ire of fans has been cast towards John Smoltz.

Philadelphia Phillies games are now available to stream on Sling TV! Which gives you even more accessibility to the Phillies, no matter where you are watching from. Sling TV lets you stream live TV and on-demand content over the Internet on any device; access free DVR storage; and choose from a selection of packages including Sports Extra or NFL RedZone. Order now and get half off your first month of Sling Orange or Sling Blue (regular price $40, now $20 + add any Extra package for half off too!)

While I generally think Smoltz is fine, one thing he does excel at is pitching analysis. He’s been very good all postseason and breaking hitters down and explaining why the pitcher should attack a certain hitter a certain way. Last night was another example of this and he was particularly critical of J.T. Realmuto and his pitch calling in two at bats. There have been more examples of this, but these two stuck in my head.

The first was the double that Aaron Nola allowed in the second inning.

Prior to this pitch, Nola had gotten Tucker to foul off two fastballs up in the zone. The curveball was called for next and Tucker deposited it into right field for a double and Houston’s first threat of the game.

After this, watching the broadcast, Smoltz was critical of Realmuto for a calling for a pitch that would “speed up his bat” against Tucker and it’s hard not to agree with him. It never really amounted to much as Nola was able to keep the Astros off the board then, but it was something to think about.

In the fateful fifth inning, Nola allowed a leadoff single to Chas McCormick, not that big of a deal, but as we’ve heard all series long, every rally is a dangerous rally. The next batter was Jose Altuve. Prior to that at bat, the plan was clearly to work Altuve away as evidenced by these charts from his first two at bats. 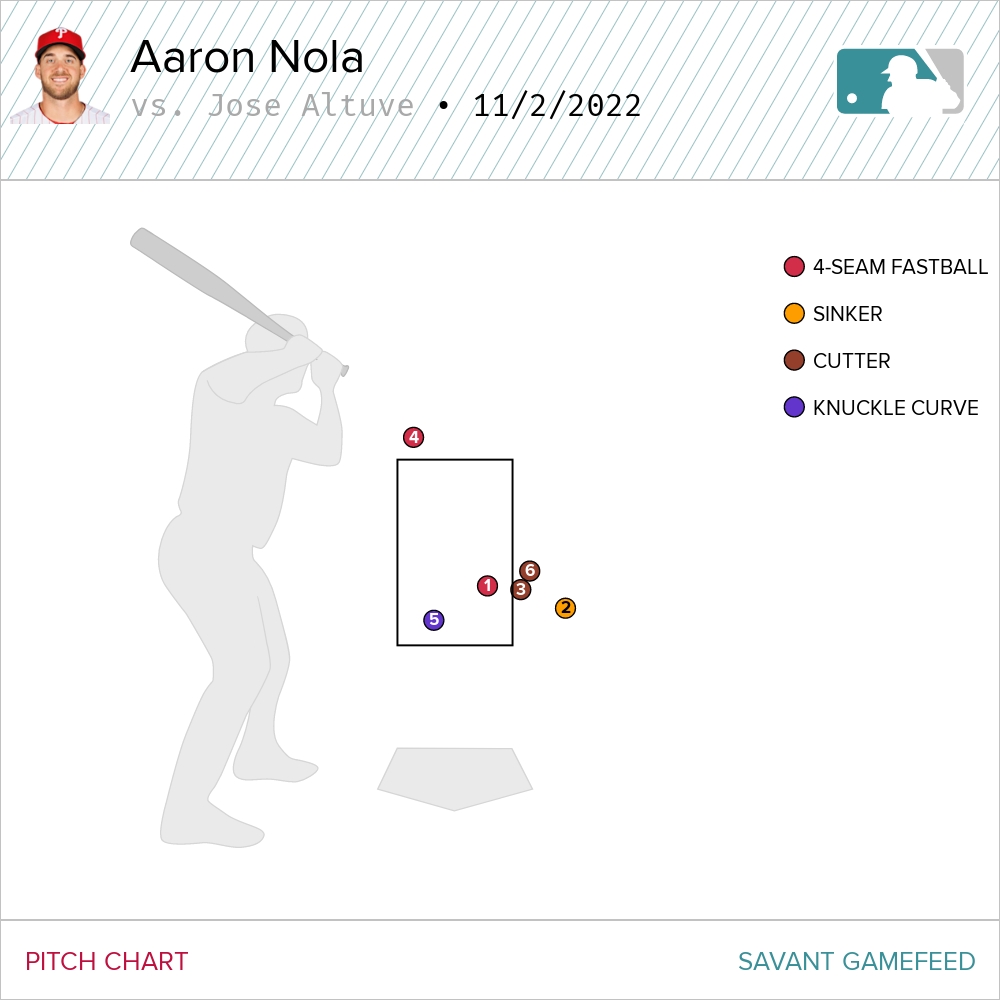 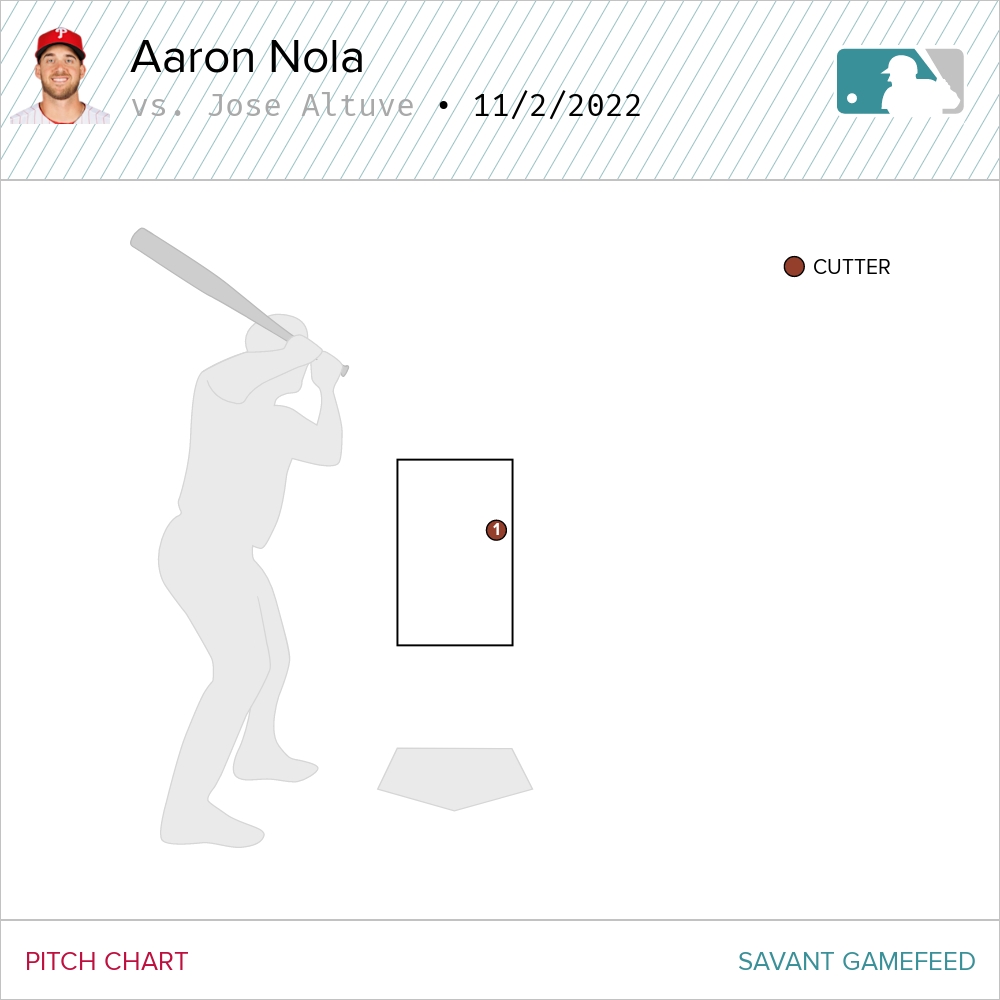 In this at bat, Nola continued with the pattern on the first pitch, then came inside with a pitch that Altuve wanted, one he dropped into left field for what started an eventual game winning rally by the Astros.

Once again, Smoltz was critical of Realmuto for trying to sneak a pitch inside against Altuve, a hitter notorious for wanting to see pitches on the inner half of the plate. The result was possibly the one that was most damaging to Nola as he then loaded the bases before being lifted from the game.

Again, it’s hard to argue that Smoltz isn’t correct here, especially if the team’s game plan for Altuve is to live on the outside corner. You could argue that Altuve came to the plate looking outside and the team tried to counteract that in the third plate appearance, but these are World Series games. Game plans needs to be adhered to as much as possible lest a rally, even one as small as that, could begin and really throw a game into chaos.

Realmuto is the Gold Glove winner for a reason and at this point, fans should continue to trust in his pitch calling during these final days of the season. But with a bullpen game on tap tonight, it’ll be up to him to guide his pitching staff through the buzzsaw that is the Astros’ lineup. That’ll mean better pitch selection from Realmuto and the coaching staff alike. Mistakes tonight could cost the team a much needed victory.