There has been one irrepressible truth about Bryson Stott this year: he has been bad at the plate. Even though he raked while in Lehigh Valley after his demotion earlier this year, major league pitching has vexed him. We’re now at the point where the team needs to decide if he’s really a viable option at the plate and what the plan is moving forward.

Now, the positive is that on defense, Stott has actually been pretty good at shortstop. His -1 OAA number is middle of the table as far as shortstops go (min. 10 chances), but it is still better than Didi Gregorius, who sits at -3 OAA himself. Should the team decide to ride or die with Stott at shortstop, the defensive aspect of the game would not suffer too greatly.

The problem is that his offense has been so bad, they may not be able to simply ride with that kind of defense. Gone are the days of the no hit, good glove shortstops that populated the days of yore. Instead, each player that takes the field is expected to produce at the plate. Stott’s .312 OPS through Wednesday’s game isn’t major league worthy. Admirably, for once, Joe Girardi has continued to stick it out, hoping that a solid game from him might kickstart the offensive promise Stott has shown in the past, but with the team bleeding wins left and right, at some point, the greater good of the team has to take priority over the development of the player. If the lineup around him were producing with regularity, something they are built to do, hiding Stott’s bat would be much more tenable. The reality is that too many people are simply not living up to their contract right now, so offense is at a premium.

Gregorius himself doesn’t look like he’s coming back any time soon, still struggling to plant on his injured knee, but we all know the center field spot is going to need to be answered soon. Mickey Moniak’s return to Philadelphia may have implications on if Stott is going to stay in Philadelphia, which is influenced by Bryce Harper’s injury. With Harper on the shelf with the glove, Girardi may opt to keep Roman Quinn on the team, instead demoting Stott and his struggling bat to keep getting plate appearances in Lehigh. We’ll have to wait and see.

In the meantime, what exactly is Stott struggling with? To get to that, we have to see where the potential pitfalls were when he arrived in Philadelphia. What was predicted of his promotion in spring training?

When Matt Winkelman put out his top prospect rankings, he had Stott third behind Mick Abel and Andrew Painter. Summarizing his game, he wrote this about the shortstop:

He has a good feel for contact, driven by a great feel for the strike zone and approach at the plate. He is very comfortable working long counts and hitting with two strikes. Sometimes the contact forward approach can hinder his ability to tap into his raw power, which is now more all fields than the pull power he showed in college. Due to his slower bat speed, he is vulnerable to high velocity fastballs, especially up in the strike zone. He does recognize offspeed pitches well, and is going to have to survive some of the swing related holes by not chasing. However, he is likely to be a player that is going to get beat by good pitchers executing their pitches, which puts some ceiling on his upside.

Read that again and reflect on what you see when Stott is up to bat. I’m not sure I can recall a scouting report being so accurate. Pitchers are able to beat Stott with velocity with almost stunning regularity at this point, something that is a bit worrisome.

Looking at his zone profile, we can see that one of the holes in his strike zone is in the top half, where his whiff rate is extremely above league average.

You can then see how pitchers attack him while at the plate, using the new way of thinking “hard up/soft down”, changing eye levels. The picture on the left is where pitches thrown to Stott are located when that pitch is 90 miles per hour or higher, followed by where the pitch is located when it is 89 miles per or lower. 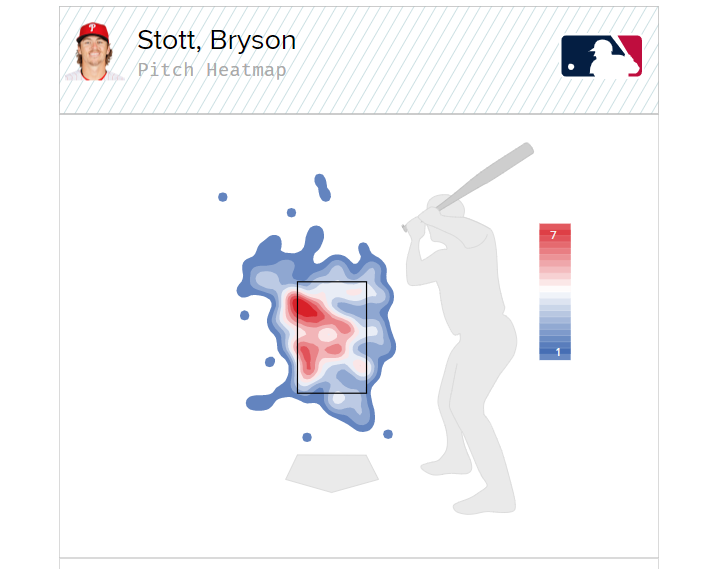 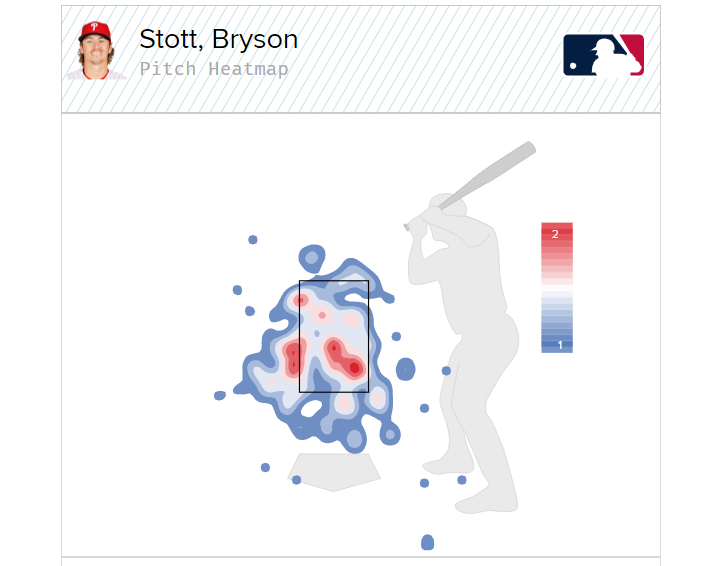 It’s clear what pitchers are trying to do with Stott. To beat him, throw the ball hard, up and away from him within the strike zone. He has yet to show that he can hit that ball with any kind of consistency. Until he does, he’ll be a liability in the batting order.

The nice thing is that this stretch of bad hitting hasn’t really gotten to him. He’s still got the same confidence he’s always had, knowing he can hit major league pitching. From the interview, the quotes he gave reporters show he’s ready to go.

“It’s not really something I’m too worried about,” Stott said. “I know I can hit. I know I’m good. I think I’m going to turn it around.”

Girardi still thinks he’s been fine, seeing that when Stott does swing he’s not going too much out of the strike zone to chase pitches he shouldn’t be chasing.

“He has not gone out of the zone a lot,” manager Joe Girardi said. “He’s been pretty good about swinging at strikes, and usually when a guy does that, success usually follows.”

Confidence in your game is nice when it’s coming from a manager notorious for not trusting younger players, but at some point, Stott has to hit. If he continues slumping, the team will have to replace him for the good of the team.